ERIKA KRUGER
​EMPLOYMENT  | INTERNATIONAL ARTWORK | ACADEMIC QUALIFICATIONS | OTHER COURSES | PUBLICATIONS AND EXHIBITIONS | AWARDS AND GRANTS
PIXIE RIVER STUDIO, Graphic Design, 2017 - 2022 present pixieriverstudio.co.nz
pixieriverstudio.co.nz
​Self-employed graphic designer
Pixie River Studio provides unique bespoke graphic design services
LECTURER, INTERIOR ARCHITECTURE, VUW, 2007 - 2009 more info
more info
ARTHUR WALLACE / KEBBELL DAISH ARCHITECTS (Architecture Services); OCTOBER 2005 – FEBRUARY 2006
Employed by Arthur Wallace, contracted to: Kebbell Daish Architects and Mark Ritchie Architects in Wellington for architectural services. Services included working on drawings for several stages of national and international projects, including feasibility and developed design, reviewing red line drawings, interior design, detailing, presentations for feasibility reports, resource consent application documents, product research and information gathering.
UNIVERSITY TUTORING; 2002 - 2006, 2020 more info
more info
TEVERETERNO, ROME; FEBRUARY 2005 – AUGUST 2005
​TEVERETERNO is a multidisciplinary contemporary art project directed by American artist Kristin Jones, situated in the heart of Rome. The ultimate goals of TEVERETERNO are to establish a ‘River Piazza’ and contribute to the revitalisation of the Tiber River. I was employed for 7 months, along with Dylan Hazlehurst, to work in collaboration with Kristin to design, organise and present the first event “Solstizio d’Estate” by TEVERETERNO on the Tiber River. “Solstizio d’Estate” was a trilogy of events, performed on a section of the Tiber River between Ponte Sisto and Ponte Mazzini on the night of the summer solstice:Responsibilities as Co-designer
While in Rome I worked on other projects by Kristin, including: “Gravity” Pantheon Rome.
“GRAVITY”, PANTHEON ROME, 2005
A luminous cone of fine elastic rays descends from the oculus and comes to a single point held by bronze plummet that marks the centre of gravity of the architectural heaven. The form is ethereal and dramatizes the simple power of geometry and light. The orientation and rotation of the sun’s spiral within the volume of the Pantheon is made evident by the delicate radiant web. The concept is to visualise the light to make tangible its direct path to earth. The proposed work is a celebration of the City of Rome, of Light and Time.
​
Responsibilities: Testing the material stress of elastic rays; installation composition, scale model making, and graphic design for promotional material.
RESEARCH ASSISTANT/FELLOW at Victoria University School of Design, 2000-2004
INTERIORS IN THE LAND OF THE GREAT OUTDOORS
Lecturer: Sam Kebbell, VUW SOAD
Duration: 10 -17 November 2004
Research towards a paper presenting the opportunities that have emerged for interiors in the land of the great outdoors, since the now historic New Zealand bach has been supplanted by its grandiose successor: the super-bach. Field research involved analysis and mapping of ‘Castlepoint campground’. 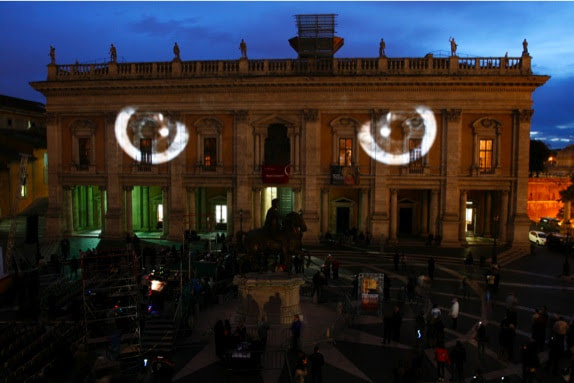 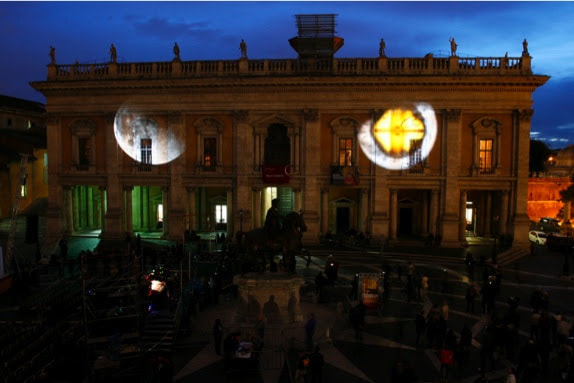 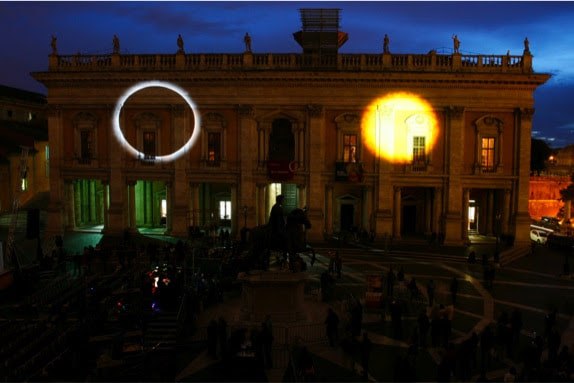 In collaboration with Daniel Brown and Tevereterno (Kristin Jones, Artistic Director) Music by Walter Branchi.
INTERMEZZO was presented as one of the evening events to celebrate Rome’s 2762nd birthday. It was exhibited on the façade of Michelangelo’s Palazzo dei Conservatori on the Campidoglio (Capitoline Hill) above Rome’s ancient forum.
INTERMEZZO represents the briefest interval within the pattern of a larger work. For the She-Wolf, this interval is that moment at sunset when the last rays of the setting sun touch the cool light of the awakening moon, recalling the ancient Roman She-Wolf from her slumbers for one brief instant. INTERMEZZO represents the She-Wolf awakened by the transforming light of day and night, resuming her form through the qualities of light and shadow cast simultaneously by the setting sun and the rising moon.
The shadow wolf comes alive upon the surface of the Palazzo dei Conservatori on the mythological night of Rome’s birth. She casts her silhouette upon the site, transforming it, and claiming it as her own once more. Produced with the support of the Candy Jernigan Foundation for the Arts, Inc., the Embassy of the United States in Rome, and the David Bermant Foundation Color, Light, Motion.
Animation Assistants: Johann Nortje and James Shaw
“QUATTRO ARIE A NOTTE, FOUR ARIAS AT THE EDGE OF DARKNESS”, 29 MAY 2008
“She Wolves from the Tiber to the Hudson; Wolf Arias” - “New York River to River Festival”
USA: New York Battery Park, outdoors at Castle Clinton National Monument; Opening launch of 2008 River to River Festival (the USA’s largest free summer-long arts festival).
Media: Digital Animation; Exhibition/installation 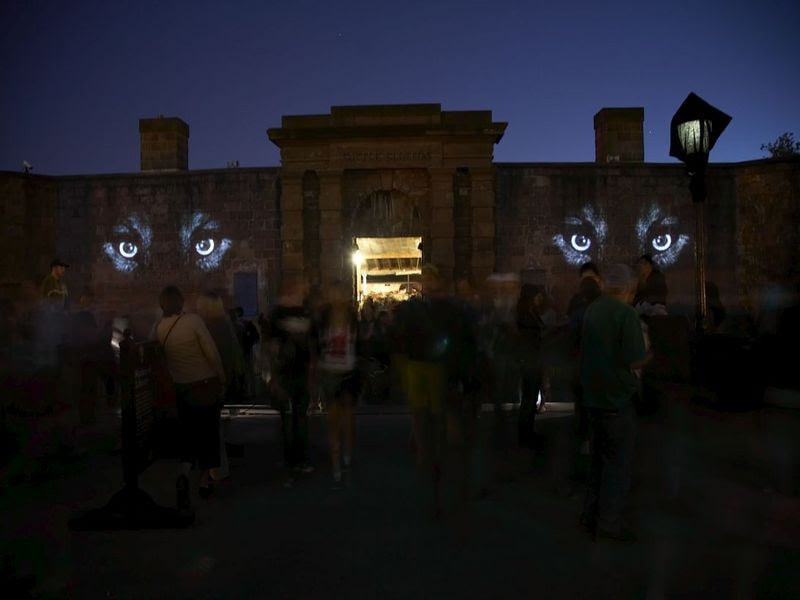 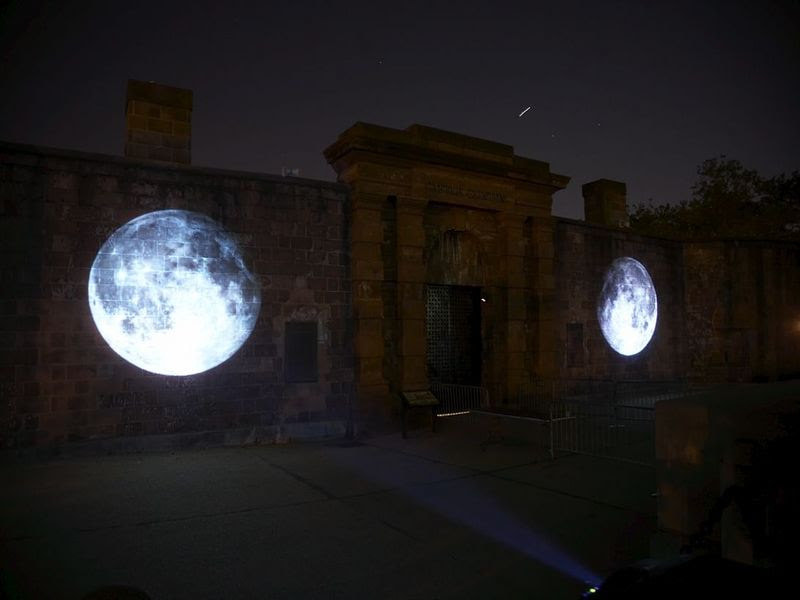 Invited world premier multimedia installation commissioned by the 2008 New York River to River Festival (annual 28 May – 15 Sept) for its opening launch on 29 May, consisting of 4 digital animations (‘arias’) by Brown and Kruger projected outdoors onto the stone walls of Castle Clinton in New York’s Battery Park using 2 simultaneous projectors; original music was by Italian composer Walter Branchi.
​
In the second of three immersive events, the composition “Four Arias at the drawing of the Light” by Branchi and “Four Arias at the Edge of Darkness” by Brown and Kruger coalesce in the “Garden of Hope’ at Castle Clinton National Monuments. Brown and Kruger link image with sound by working directly form Branchi’s composition in their animations “Four Arias at the Edge of Darkness”, created expressly to ‘awaken the spirit of the She-wolf” in a fusion of water, sound and light. 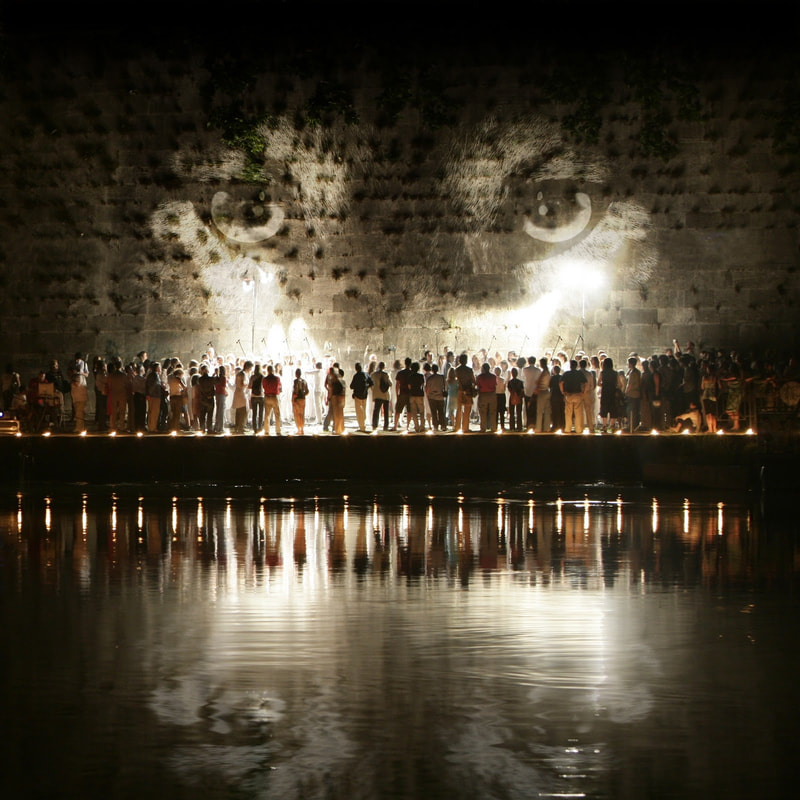 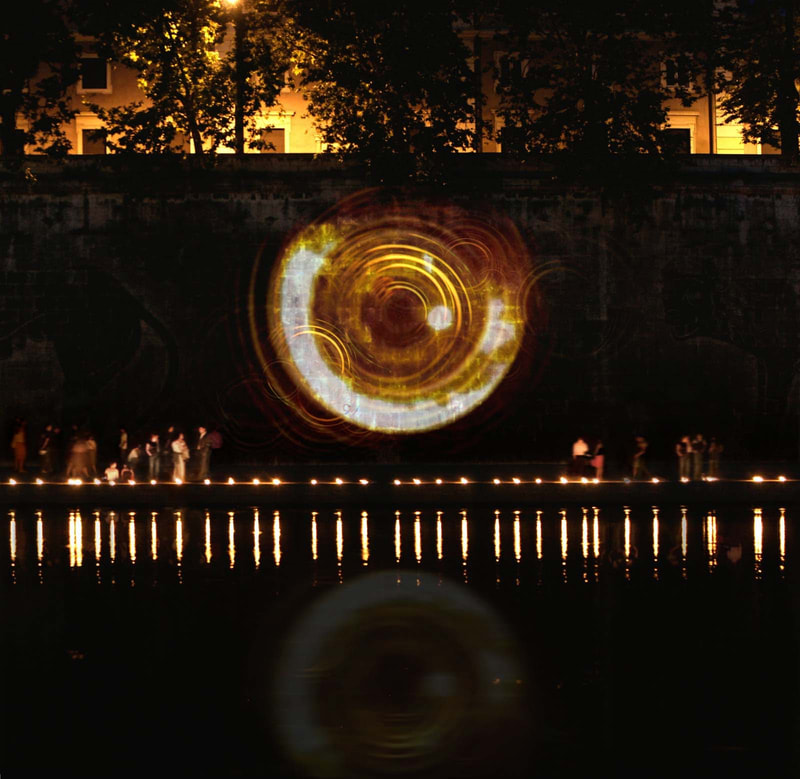 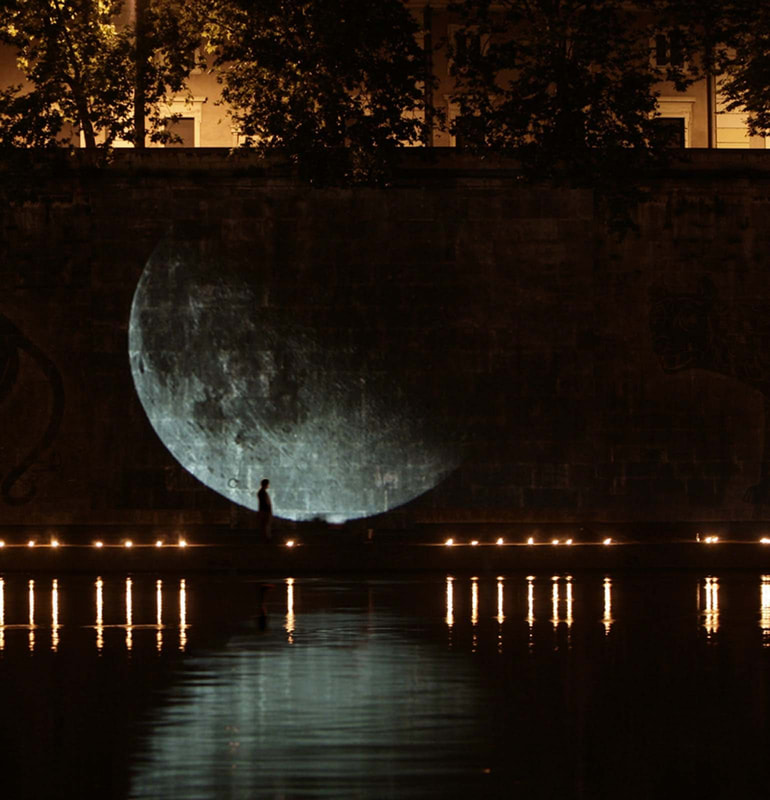 The intent of this Midsummer’s Eve Arts Festival in Rome was to expose new audiences to large-scale contemporary art in public spaces, and to celebrate the founding of Rome. For the 2006 festival, six international composers were paired with six international artists, to bring the She-wolf to life on the 12m high embankment walls of the Tiber River.

I was selected along with VUW Associate Professor Daniel K. Brown as international artists for the 2006 festival, to conceive and present the finale of the Festival at sunrise. Our projected animations entitled “Four Arias” were paired with four instrumental compositions by Italian composer Walter Branchi.

The animations (8m high) were projected simultaneously (through six projectors) along the half kilometre Tiber embankment wall where a frieze of silent shadow silhouettes from the 2005 event remained. The “Four Arias” integrated four elements of nature – Earth (Tiber embankment walls), Air (moon), Water (Fountains of Rome), Fire (sunrise) – to send the awakened spirit of the She-Wolf back to sleep at the coming of dawn. The all-night programme of events, entitled ‘Ombre dal Lupercale’ (“Shadows from the Realm of Wolves”) was attended by over 10,000 people. 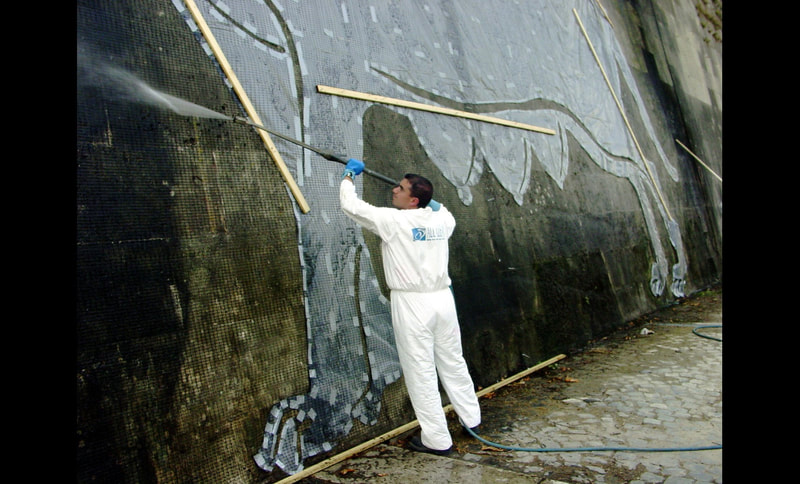 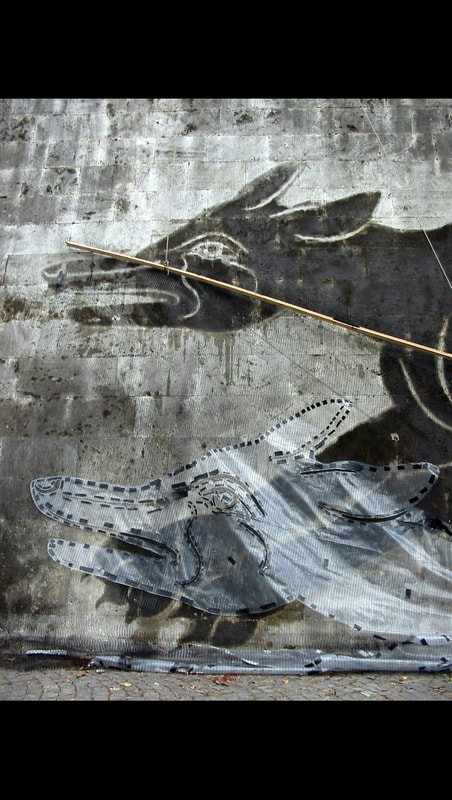 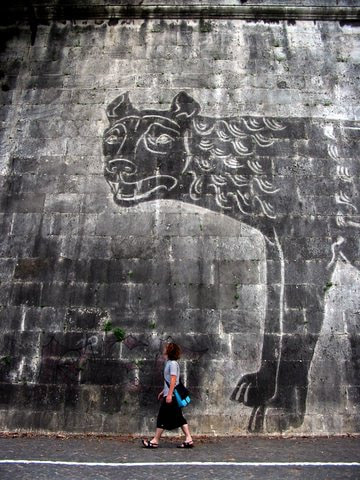 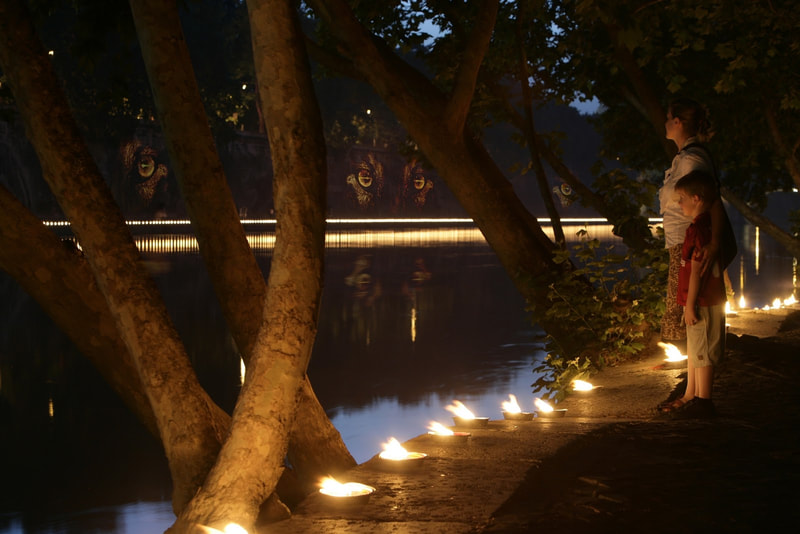 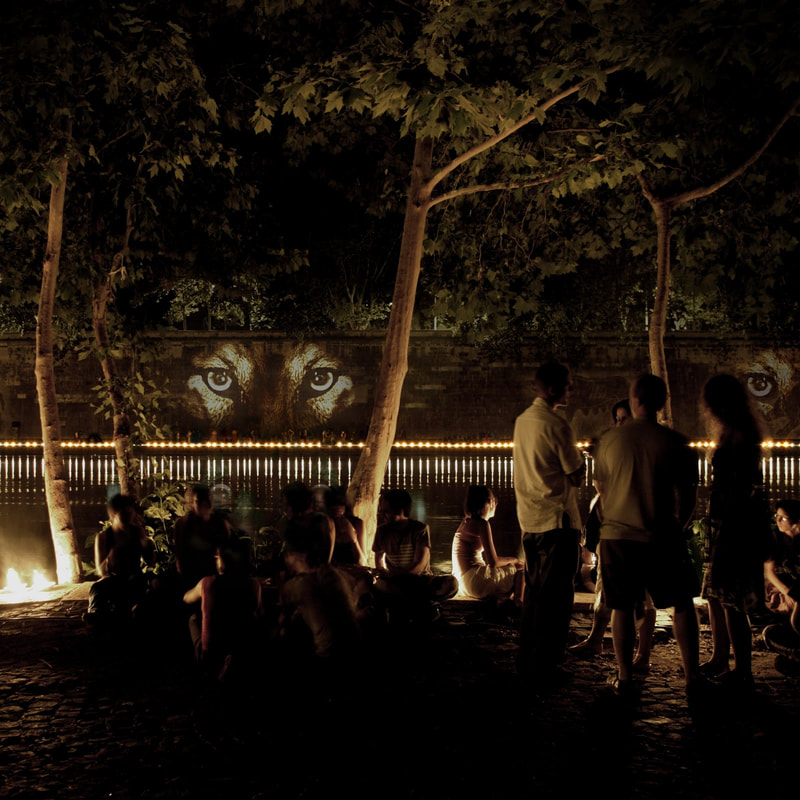 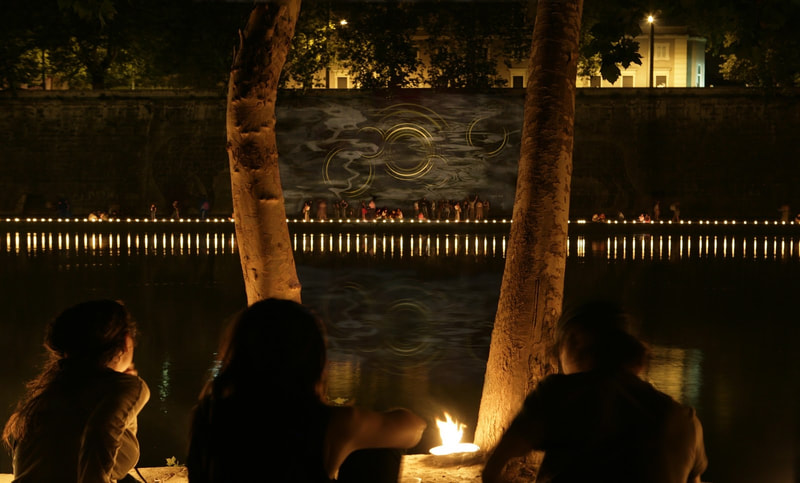 The aim of the Tevereterno “Solstizio D’Estate: Ombre Dal Lupercale” project was to raise awareness of the need to revitalise the polluted Tiber river and reclaim it as a public space; to encourage multidisciplinary artists and designers to participate in promoting this awareness. The half kilometre long installation on the Tiber River was initiated by American installation artist Kristin Jones, in collaboration with myself, Dylan Hazlehurst, and Associate Professor Daniel K. Brown.
​
Twelve 8m high She-wolf shadows were revealed in June 2005 upon the stone walls of the Tiber River by cleansing the patina of time from the 12m high embankment walls. On the evening of the summer solstice, 2758 candles were lit along the banks of the Tiber, symbolising the number of years since the founding of Rome. The candles illuminated the exposed She-wolf shadows, while also representing the awakened spirit of the She-wolf.